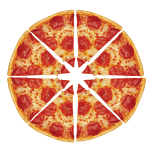 If Jake ate 38 and Amanda ate 28 of the pizza, how much pizza did they eat altogether?

The pizza they ate all-together would be:

So, Jake and Amanda ate 5 out of the 8 slices or 58 of the pizza altogether.

Let’s take another example and learn to add like fractions using a number line.

Here, the two fractions refer to the same whole 9. So, we divide the number line into 9 equal parts as shown.

The first hop depicts 49 of a mile, and rest of the hops show 39 of a mile. The endpoint 79 denotes the total distance covered or the sum of the two fractions.

Framing a fraction-addition equation for the model, we get:

Now that we have learnt to add like fractions with the help of real-life examples, let’s explore like-fraction addition presented as math problems!

Recollect these two points whenever you add like fractions.

✯ While adding like fractions, we don’t add the denominators. We simply retain them.

✯ We add only the top numbers and write the sum over the common denominator.

Simplifying the Sum - An Added Step

Here’s an example with an added step. Let’s work it out.

And now comes the added step. The fraction 915 can be reduced further. That is to say, it can be simplified to the lowest terms. To reduce it,

Cancel the common factors if any:

Now that we know the steps, let’s implement them to add three fractions.

Adding three fractions doesn’t make much of a difference in the steps involved. Let’s look at an example.

[Adding numbers on the numerator]

1) Find the sum of the fractions represented by the models.

The addends represented by the models are 37 and 27.

2) Sarah cut a cake into 12 equal pieces. She gave away 312 of the cake to her friends. She let her family have 412 of it. How much cake did Sarah give away in all?

The number line model that represents the given scenario is:

So, the total rainfall the city saw is 35 of an inch.

The Lesson in Short

Excel in the process by practicing our free printable Adding Like Fractions worksheets.