How to Convert Decimal to Binary | Methods and Examples

Overview of Decimal to Binary Conversion:

What Are Binary Numbers?

Think about phone numbers, zip codes, money, measures, or even time. They are all basically numbers 0 to 9, aren’t they? To be precise, they use the decimal number system or the base-10 numerals.

But, what’s especially interesting about the language of computers is that it uses the binary number system. A binary number is made of 0s and 1s. A binary digit is called a bit.

In this lesson, we are going to show you two different methods of converting a decimal number into a binary number.

Step 1: Look for a power of 2 that is less than or equal to the decimal number.

Let’s write down the powers of 2.

Step 2: Decompose the decimal number with the chosen power of 2 as one of the addends.

Note: To find the other addend, subtract the selected power of 2 from the given decimal number. In the above equation, when we subtract 16 from 25, we get 9.

Step 3: Repeat the steps 1 and 2 until all the addends are powers of 2.

Here, both the addends are powers of 2. So, we stop.

Step 4: Express the decimal number as the sum of weights.

We have decomposed our decimal number as:

Expressing it as the sum of powers of 2 or the sum of weights, we have:

Step 5: Assign 1 to the powers of 2 we've used to decompose the number and 0 to the others.

Step 6: The string of 0s and 1s from left to right is the required binary equivalent.

Note: The subscripts 10 and 2 indicate the numbers in base 10 and base 2 respectively.

Let’s look at another example for the same conversion.

Listing the powers of 2, we have:

Composing the string of 0s and 1s, we have:

The double dabble method or the repeated division method is the easiest way to convert a decimal number into a binary number. Let’s convert 115 from base 10 to base 2 using repeated division.

Step 1: Perform repeated division of the decimal number by 2 until you obtain 1 as the quotient. Keep track of the remainders in each step. 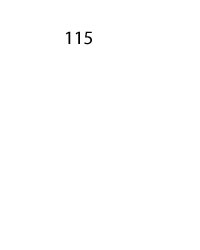 Check out the double-dabble method for 115 with a click on the number!

Step 2: Write the final quotient 1 along with the remainders from the bottom to the top, and compose the binary string. 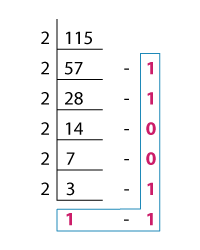 Convert 14510 to a binary number using the double-dabble method. 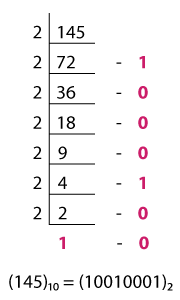 A Few Points to Ponder