How to Solve One-Step Equations

What Are One-Step Equations?

In this lesson, we’ll learn how to solve one-step equations that involve each of the four operations.

Look at the equation.

To solve this equation, all we need to do is find a value of the variable x that will make the equation true.

Our first goal is to rearrange the equation with the variable x left by itself on one side. This isolation is done by using inverse operations. Here, the inverse of addition is subtraction.

We can’t simply do that on one side. We’ll have to strike a balance between the two sides of the equation,so whatever is done on one side should be done on the other side too. 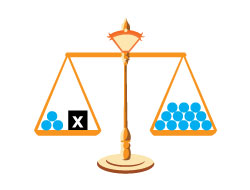 Understand the balance between both sides of the equation with a click on the balance!

So let’s subtract 3 from both sides.

Both +3 and –3, the zero pair, cancel out each other and leave us with x on one side and 9 on the other side.

Now, let’s move on to the next equation that involves subtraction.

The inverse of subtraction is addition. So, our first step is to make the variable stand alone on one side by adding 8 on both sides, maintaining the balance.

Now the –8 and +8 cancel out, and we have our variable y all by itself. Adding the numbers on the other side we have:

To solve this equation, we’ll have to isolate the variable p and get rid of its coefficient, which is 6 in this case.

Which operation should we use here? Yes, the opposite operation of multiplication is division.

But we need to divide not just one but both the sides of the equation by 6 to keep it well-balanced.

Let’s move on to the next equation with division.

Our first step is to isolate the variable m as usual. The inverse of division is multiplication. Now to undo division by 5, we need to multiply by 5. We’ll do that on both sides of the equation to maintain the balance.

The 5s on the left side cancel each other. Multiplying the numbers on the right, side we have:

We have solved our equation.