What are Ordinal Numbers?

An ordinal number is a number that tells the position of something in a sequence or a list. Let’s celebrate Jungle Sports Fest, the most-awaited event of the year, and in the process learn ordinal numbers.

The jungle is abuzz with animals cheering for their friends. The animals have sprinted as fast as they could and reached the finish line. Here are the results. 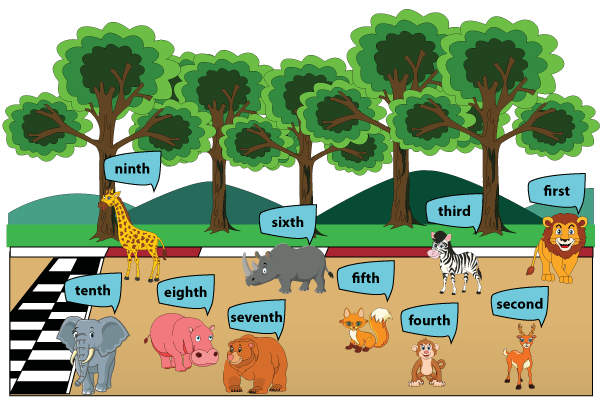 Here you have two questions to think and answer.

1) How many animals participated in the run?

To answer the first question, you’d count the participants 1, 2, 3,… and obviously say 10.

And to answer the next, you would look at the positions and instantly say “the elephant".

Note: The word “ten” talks about how many animals participated in the run while the word “tenth” refers to the animal in that position in relation to the other animals.

The counting numbers that indicate the quantity of items on a list are called
cardinal numbers.

The numbers that denote the position or rank of an item on a list are called
ordinal numbers.

And the cardinal names with a one, two, or three at the end have their ordinal names as follows.

Note: In certain cases, the spelling of the cardinal is modified to accommodate the suffix.

Now, coming to the numerical representation of ordinals, it’s nothing but the cardinal number along with the appropriate suffix. Here’s a table illustrating the first twenty ordinal numbers both in written and numerical forms. 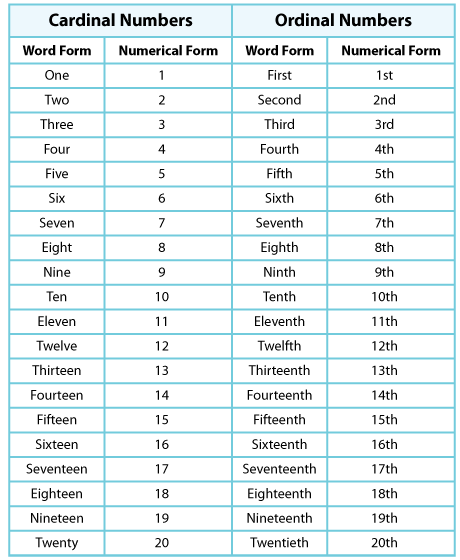 1) Which flower is in the sixth place from the left?

is in the sixth place from the left.

2) In which position is the calculator from the right?

The calculator is in the 5th position from the right.

3) Write the ordinal numbers and names of the cardinals below.

Plunge into practice with our free printable Ordinal Numbers worksheets!