With a starfish, a ladybug, and an octopus greeting you, this free, printable identifying invertebrates worksheet gives kids a healthy dose of curiosity about the world around them. Invertebrates are the wriggly, crawly, slimy creatures with no backbones inhabiting our planet. Trail after the wriggly worm, crawl with the ant, swim with the lobster, and stay away from the tiger and bear as you skim through this worksheet determining which creatures have a backbone and which of them don't. Identify and check the seven invertebrates, and that's a job well done. Is there a more invertebrate-dense worksheet pdf than this? You'd be hard-pressed to find one!

This recognizing invertebrates worksheet is ideal for kids in grade 2 and grade 3. 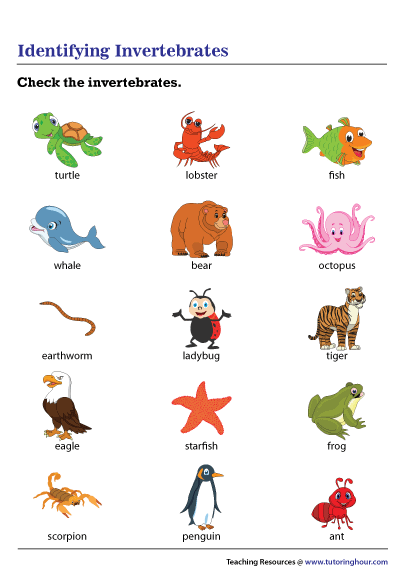 ▶ Classifying Animals into Vertebrates and Invertebrates

▶ Compare and Contrast Vertebrates and Invertebrates

Printable Worksheets Can Be Downloaded (For Free) without Login.

Become a Member to Access the Following Additional Features (Free for a Limited Period):