Our free, printable worksheets on multiplying decimals by powers of ten allow the aspiring mathematicians understand the effect of multiplying a decimal with ten, hundred, thousand, and ten thousand. While the idea of finding the product of decimals using powers of ten might sound like an uphill task for beginners, consistent practice will make a difference, and soon they'll stick around asking for more once they are keyed into the simple technique! To find the product of decimals and powers of 10, move the decimal point to the left as many times as the number of zeros in the given power of ten. For example, 4.56 x 10 = 45.6 and 65.8 x 100 = 6580. Use the included answer key to validate the answers.

We suggest these pdf resources for the grade 5 and grade 6 students. 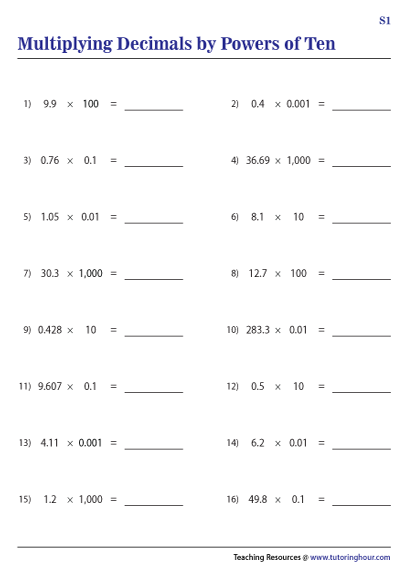