Greater Than or Less Than Worksheets

You've just hit upon the treasure of our free printable greater than or less than worksheets. These pdf worksheets, equipped with numbers 1 to 20, help keep your comparing practice in tip-top shape. Comparing the distance between two locations, comparing the weights, or comparing the price, we thrive on comparing every day. Practice comparing numbers up to 20 using the greater than, less than, or equal to symbols and comparing a set of three numbers to find the largest or smallest number in it. An easy trick to memorize the greater than and less than symbols is to imagine the symbols <, > to be the mouth of an alligator. Remember the hungry alligator devours larger numbers by keeping its mouth open toward them at all times. Start comparing numbers up to 20 with impeccable accuracy!

This set of free worksheets on comparing numbers using the greater than, less than or equal symbols is drafted for kids in kindergarten and grade 1.

You are here: Number Sense >> Comparing Numbers >> Greater Than or Less Than 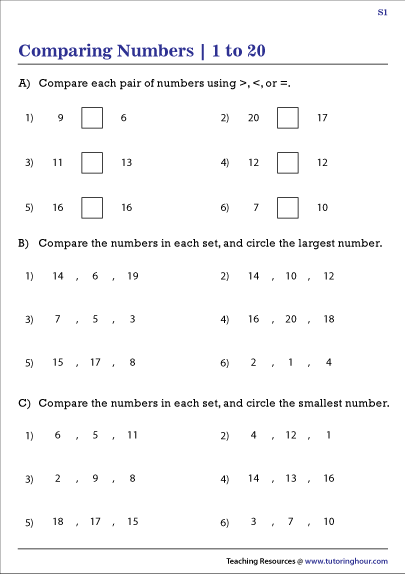 ▶ Compare Numbers between 1 and 10